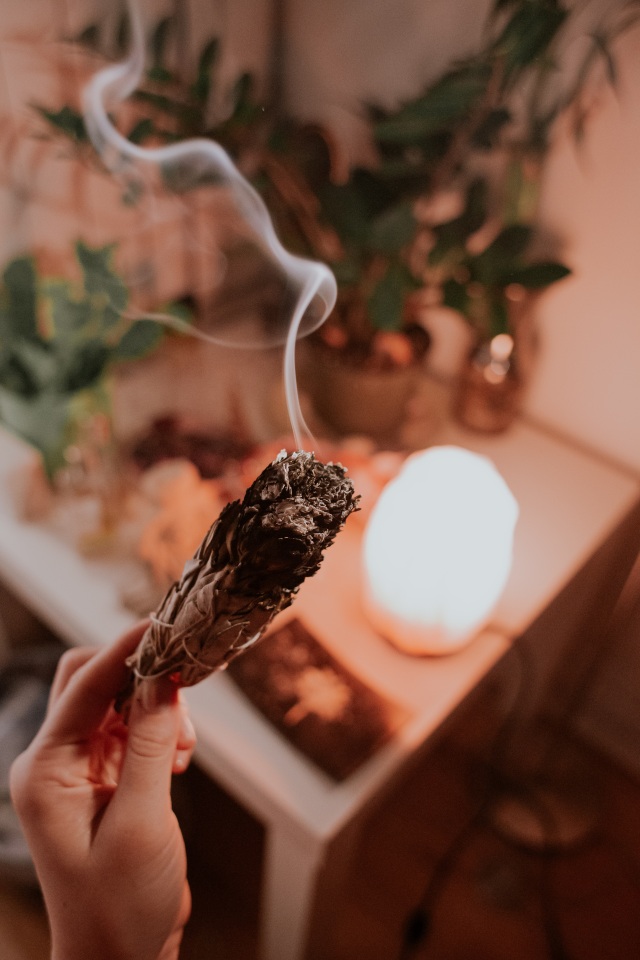 The easiest and most popular way to tune into the benefits of white sage is by burning the dried leaves. This is known as sage smudging. Light one end of the dried sage bundle, it will automatically go out or you can blow it out once it starts smoking like an incense stick, direct the smoke onto the areas that you want to clear or protect. You may have to relight here and there if you're doing a few rooms. Make sure you have an fireproof ash catcher as you perform your clearing ritual. Smoke will waft and begin to fill the space, it is now cleansing. As you're burning white sage it’s important to express gratitude for the help of the plants spirit as well as to express your intention for why you're burning sage in the first place. The smoke attaches to negative energies, and as the smoke then begins to dissipate it transforms those negative energies into universal energy. The energy of white sage, brings cleansing, protection, and blessings into the space it's burned in. White sage can be used in any number of situations including to cleanse yourself, others, objects, a room, building, crystal, or even a piece of land. If burning indoors open a window as to push any negative out.

Some examples I personally use it for:

I'm an empath and seem to take on others energy, so smudging myself helps release any energy attachments and reground me. It's an instant mood booster!

I'll smudge new crystals and ones I already have.

I'll smudge the home if our energy with each other has been off.s

A room I'm about to meditate in.

The room before I perform reiki & after.

If you came across someone that just made you feel icky lol. Smudge yourself and/or the area they were in.

So many reasons to use it, this is just a few of my own daily examples.